Its a Bronze for Chris McCarthy in Kumite at the Cadet, Junior and U21 European Karate Championships in Tampere, Finland. 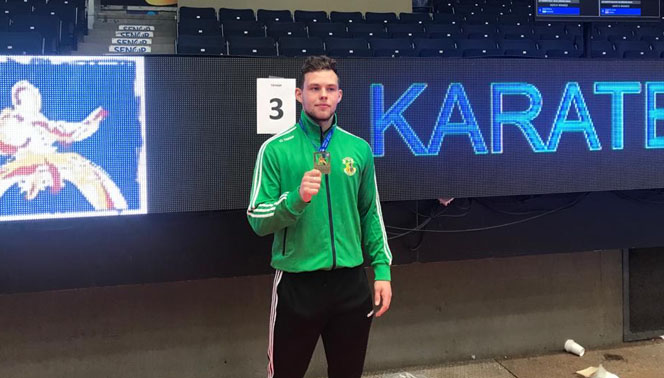 Gold medalist as +84kg junior in 2019 and bronze medalist as +84kg U21 in 2020 Chris decided to switch weight categories with his twin brother Sean in the run up to the Tokyo Qualifications. Today he wins bronze for Ireland in -84kg kumite having fought 5 rounds.

Having initially stormed through the first round 14:6 against Marcus Markanen of Sweden he missed out on 2nd round against a tall Raybak Abdesselem of France 1:5 who ended up winning the category. This enables McCarthy a further opportunity of repechage and fight for the bronze place. He puts up an amazing fight against Nikola Maslak of Serbia (9:2); Muhammed Tamyuksel of Turkey (3:0) and finally beating Renato Resetar of Croatia (5:1).

O.N.A.K.A.I, the NGB for Karate in Ireland selected further 7 athletes for the U21 squad out of which 5 travelled to Tampere.

David Gannon competed on Friday the 20th in U21 Kata category achieving 11th Place overall, a fantastic achievement for Gannon who competed at this level for the first time, having previously accompanied the squad in Cadet and Junior level.

Incoming member to the squad, David Gahan achieved a fantastic 7th place in -67kg U21 kumite. David was selected for the first time and has shown great promise. He fought off David Marosi of Slovakia 3:0 in the first round. He was beaten by the Altuner Yilmaz Ekrem of Turkey 0:5 who goes on to win gold for Turkey. This provided David with opportunity of repechage where in the 1st round he eliminates Leons Gaiduks of Latvia 2:0.

Competing also were Jessie O'Reilly, who returns to squad after 4 years break in the -55kg kumite and Sean McCarthy. Sean took on Dimitriy Chernov of Ukraine 4:0 in the 1st round. He takes on Heim Ugo of France in the 2nd round, but narrowly missed out 5:7 in the last seconds of the match.